After the authorization granted by the TAAF and the announcement of the DXpedition, the time has come to gather the equipment and to advance the preparations. As you can see in the photo below, the discussions are long! Photo TAAF:

The dates are now known. The Marion Dufresne will leave Reunion on December 8, with a stopover in Tromelin to supply people there (another beautiful DX), then head for Crozet. I should get there around Christmas.
The ship will return on March 26, 2023 to pick us up, and after stops in Kerguelen and Amsterdam, will arrive in Reunion on April 16, 2023. I will therefore be at the Alfred Faure base for 3 solid months. These dates may vary slightly depending on weather conditions.

I am in close contact with the TAAF (Thanks to the manager of Crozet, and to Mr. Chareyre for their attention) in order to prepare my arrival in the best possible conditions. Some of the main points under
discussion are where the antennas (HF and QO-100) will be installed, as well as the cabin.

Obviously, I will not start operating the day after my arrival. I’m going to have to set up the antennas and the station. For this, the help of other people will be needed. The weather will have its role to play, because it would be
impossible to climb on the roof, erect a mast in high winds: the base commander will have to give his agreement. Getting the operation started will not be the top priority on day one.

In theory, I will be staying in the Albatros building. It is next to the Biomar building. Looks like they fixed it so I wouldn’t be in the way of others (night operation for example). Looking at the
the image below will give you a better idea. 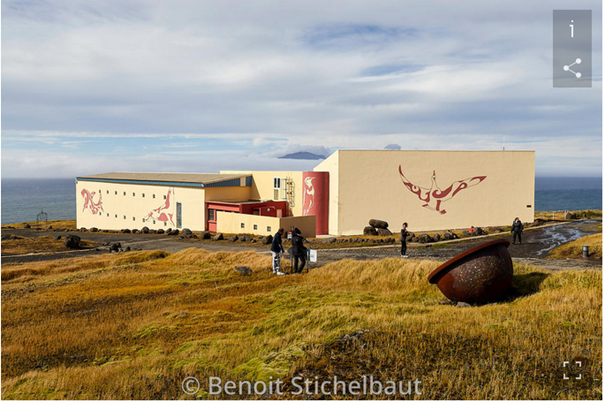 © Benoît Stichelbaut – www.stichelbaut.com
On the left is the Biomar building, on the right the Albatross. Thanks to Mr. Stichelbaut for allowing us to use his photo.

The code has not yet been issued, and I have requested a special call to commemorate the 60th anniversary of the first transmissions made by Mr. Baudelot, the first radio amateur on the island in the years 61/62. The code will be
released only a few hours before the start of the activity by Paul F6EXV and Jean-Michel F6AJA, ie after my arrival on the island. Paul will inform via internet and Twitter, Jean-Michel on his DX bulletin. It will be so for
avoid pirate activities. Everything that does not come from Paul or Jean-Michel will only be speculation. Beware of FT4Wxxx that may appear!

On the equipment side, things are also progressing. Many sponsors were kind enough to respond to our requests. Contrary to our initial information, I will not be using a K3. As Elecraft no longer produces K3S, it was
difficult for them to lend me some or sell some to me. They mentioned a K4 but I don’t want to go with just one transceiver, I need at least a second in case of failure. Given the supply problems faced by all manufacturers, I did not want to take any risks. Therefore, I decided to use a transceiver that I have at home, as well as used by F6KOP for their DXpeditions, namely the TS-590. It is fully equipped, and has a big advantage: no interface required to operate the FT8, a simple USB cable between the platform and the laptop is enough. Antenna sockets, a receive antenna connector, RS232 interface, USB, all filters and ATU. No other options will therefore be necessary. Plus, it has a great receiver and can be easily found second-hand at a very reasonable price.
So I bought a TS-590 which is being modified by Kenwood Service, to fix the known ALC problem. This modification is covered by the Kenwood warranty. I will soon be buying another 590 which will also be modified.

On the amp side, after interviews and advice from the Clipperton DX Club and the F6KOP team, I chose a 500W tube amp, the Acom 1010, which is less fragile than transistor amps. It can handle 3/1 SWR which is a great advantage for a place where I won’t be in full control of the environment. So I’m going to buy a 1010 and have another one loaned by the CDXC via F6KOP. May they be thanked.
I also thank the Acom company for the discount it offers on purchase, but it is not a gift. They do the best they can, despite everything, the cost is not negligible in the overall budget. The antennas will be the subject of another press release, after we have done some testing at Paul’s QTH in the spring. More to come later.

I asked the TAAF to obtain authorization to send part of the equipment with the previous mission to supply the ship (departure in November). Sometimes it happens that due to the weather during the landing, not everything can be brought to the island. Imagine being on the island without a resort! As I often say, Crozet is not Tahiti!

There’s still much to do. Going to the TAAF islands for 4 months requires a lot of work, and has to be earned. One of the next items on the agenda is winter clothing and organizing skeds with schoolchildren through QO-100. Thank you to all the team members and our sponsors, nothing would be possible without them.

In conclusion, you can see that the preparations are going well, thanks to the continuous teamwork. Although the sponsors help a lot, the expenses continue and additional help will be welcome. I guess Crozet will be an ATNO for many,
and you can’t afford to miss it, because no one knows when the next ham operation will be from this most needed #3. Thank you all!

You will find our PayPal information on the Crozet2022 homepage:
http://crozet2022.ref.org/home.html