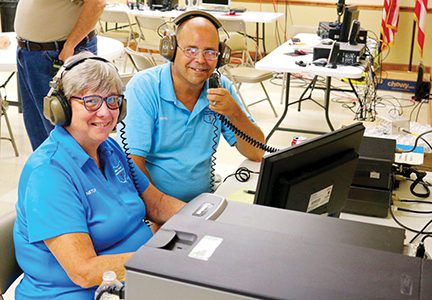 The Madison County Amateur Radio Club hosted Field Day exercises at Deercreek Township Hall in Lafayette. The exercise involves setting up temporary radio stations and, over a 24-hour period, contacting other amateur stations across the country.

The Madison County group began operations at 2 p.m. on June 26 and, using three low-power transmitters, wired antennas and a backup power supply, made a total of 581 contacts with amateurs in 47 states and seven countries. Notable contacts outside the United States included stations in Australia and Indonesia, as well as in three Canadian provinces.

Contacts were made using a variety of modes of communication, including voice, Morse code, and digital modes. Contact with a Michigan station was made via an amateur satellite as its orbit passed over us. Club members used their own equipment and some belonged to the club. Each contact was connected to a networked computer system, and each operator’s contacts were identified by the logging program. Scores have been reported but no competition results are available at this time.

In addition to electricity for the transmitters, the project was powered by a regular diet of snacks, including a birthday cake for Tony Pugh, NO8F ham, the club president, and a potluck dinner. Larry Krist, N8CWU, chaired the event.

Field Day is sponsored by ARRL, the National Amateur Radio Association, and has been an annual event since 1933. This year’s operations involved more than 40,000 amateur radio operators from across North America. To learn more about the Madison County Amateur Radio Club, visit http://mcarcoh.org/. To learn more about amateur radio, visit www.arrl.org.